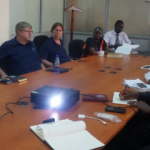 The Act does offer an indirect form of autonomy in which the Academic Board shall, subject to the provisions of this Act have the following powers and duties;

COMPOSITION OF THE GOVERNING COUNCIL

The governing council is composed of 16 members, namely;

FUNCTIONS OF THE GOVERNING COUNCIL

The functions of the Governing Council are spelt out in the Universities and Other Tertiary Institutions Act 2001 (as amended in 2003 and 2006).

To exercise the general management of the affairs of the Tertiary Institution and exercise general control of the property of the institution. The Governing Council may acquire and hold movable or immovable property as may be necessary for carrying into effect the provisions of this Act and may sell, lease, mortgage or dispose of any property.

The Council has four Committees;

The members of the Governing Council are nominated by the respective constituencies on request by the College, and appointed by the Minister of Education and Sports. The structure of the College is currently linked to the MoES and without a direct link to the industries or employers. The Chairperson of the Governing Council reports to the Minister of Education  and Sports.

UTC – Bushenyi is managed by the Principal who is the Accounting Officer of the College and reports to the Governing council and the Commissioner BTVET. The College has a Top Management Committee comprising of nine members,

The College also has Academic & Non Academic departments and sections, an Academic Board to manage training affairs, Contracts Committee to manage procurement, and a Disciplinary Committee.

Get in Touch With Us!

Apply for a Course